Skip to main content
It looks like you're using Internet Explorer 11 or older. This website works best with modern browsers such as the latest versions of Chrome, Firefox, Safari, and Edge. If you continue with this browser, you may see unexpected results.

Welcome to the PVCC Archives

Stardust was designed by Ana Thiel and acquired by the college in October 2000. According to Thiel, Stardust represents a source of light from which other lights emanate. The source is a circle, the symbol of infinity, and the lights surging from it are reflective spheres. Thiel said the sculpture has seven spheres since seven is considered a powerful number in many belief systems.

Stardust is located in the fountain at the center of the M Building courtyard. 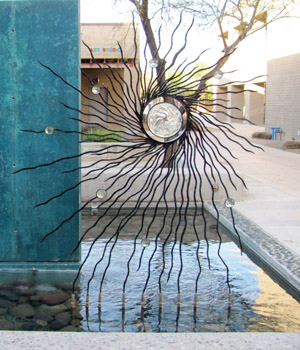 Gateway to a Life-Long Journey of Learning

This sculpture was designed by Jane Kelsey-Mapel and installed in April-May 2006. Faculty member David Bradley was instrumental in the acquisition of the sculpture and worked closely with the artist. According to Bradley, the 12-foot tall horse represents the educational journey, and the 7-foot gateway under its belly represents the threshold learners cross on that journey. Kelsey-Mapel, along with Bradley and PVCC art students, spent several weeks installing and completing the sculpture.

Gateway to a Life-long Journey of Learning is located on the south plaza of the Center for Performing Arts. 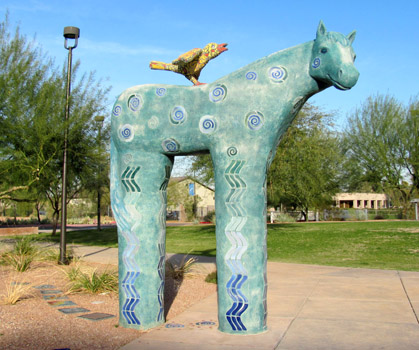 From the latest campus news to sports, health and "man on the street", the Puma Press covers it all--check out the link below:

The sculpture at the center of the campus represents the educational process, moving from basic knowledge to complex ideas. The sculpture base includes three simple shapes: circle, triangle, and square. Ascending the sculpture, these basic shapes are transformed into more complex forms: the ellipse, parallelogram, and isosceles triangle. Similarly, through education, an individual is continually transformed: growing, changing and understanding more complex ideas and thoughts.

The sculpture is unnamed and was designed by Bob Watkins of the DLR Group (formerly Lescher & Mahoney). Lescher & Mahoney were the initial master planners for the first phase of the campus.

Lescher & Mahoney knew they wanted to put some kind of sculpture in the center of the campus, but didn't know exactly what. While designing the campus model, Bob went to a shop to pick up materials for the model. He found some metal tubes there in the three basic shapes (circle, triangle and square) and bought them. As he played with them, Bob realized that cut on a slant they changed shape into more complex forms—reminiscent of the educational process. 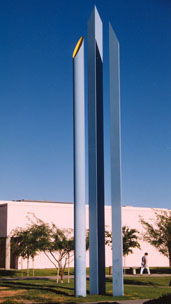 The Terra Cotta Warriors are located in the hall at the east end of E Building. 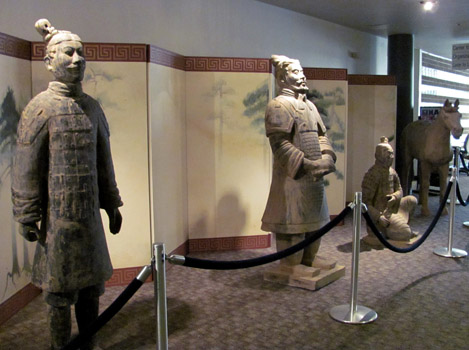